Naomi Grigg aka The Neutrino 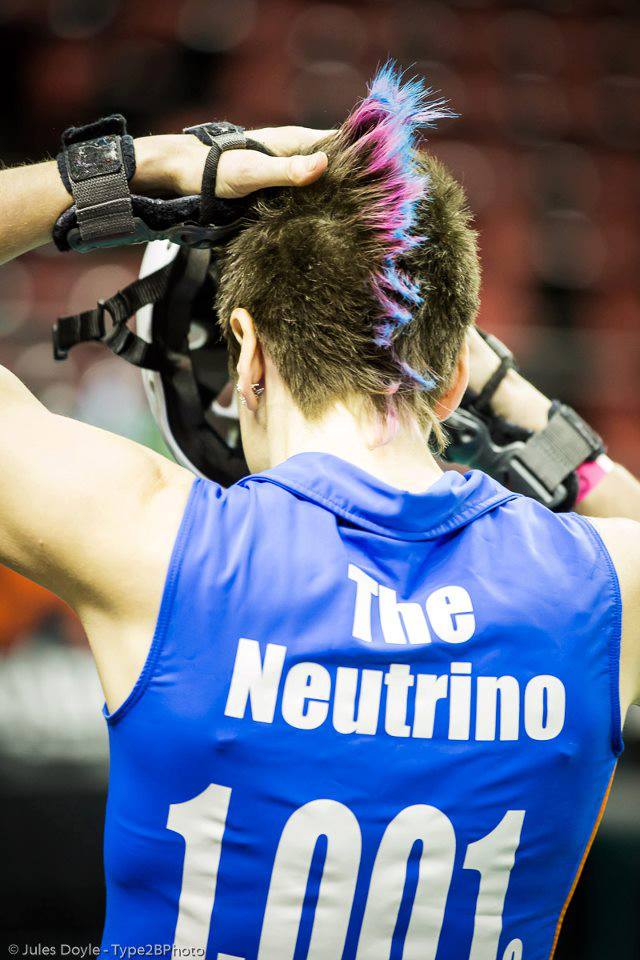 I met Naomi years ago, when we both were doing slalom. Several month ago, I discovered that she’s now playing Roller Derby, and decided to propose to interview her.

Can you introduce yourself ?

Hi, I’m Naomi Grigg, AKA ‘The Neutrino’ of the Rat City Roller Girls. I’ve skated for 19 years, and have now been playing derby for 2 years.

When did you start skating ?

Which disciplins do you pratice ?

Do you dance with quads or inline skates now ?

Both. I was dancing completely on inline skates for a long time after I came to Seattle, but then started using quads, and now I like to play with both. Sometimes I’ll switch half way through the night.

How did you discover Roller Derby ?

I was visiting Melbourne, Australia during my final tour before retiring from the life of flying around the world as a freestyle slalomer. My hosts (Bayside Blades skate shop) were going to a roller derby bout to set up a booth and invited me along. It was Rat City Roller Girls Vs Victoria Roller Derby League. The skaters were dressed as athletes and demonstrating good skating skills, so my view of derby being for women to dress badly and hit each other while not being able to skate, quickly changed.

Does freestyle, and your experience as a street skater, help you to play roller derby ?

It’s really hard to say. Most of my specific skating abilities haven’t been useful in roller derby, but the core skating skills gained in those types of skating definitely helped me to pick up derby skating at the start. Only now am I beginning to put spins into my derby, since I spent the first couple of years focussing on learning the game and learning the basics. I don’t even jump yet.

Do Roller Derby players in the US also skate outside (like we do) or do they only practice indoor ?

They don’t skate much outdoors and certainly not in the rain. Players will skate outside more as a novelty than as a habit or choice, and when they do it is almost always for fitness style skating in a straight line along paths, like a group street skate, Paris Friday Night Skate style.

It seems that Derby player don’t understand why we skate outside without pads. Have you also experienced that ?

Yes! Safety and health is considered so valuable here in USA that people often think you are stupid if you choose to not wear pads. Before derby, I did not understand, but now I do, because after 3 months of playing only derby, and always wearing full pads, I went for a street skate with my friend on inline skates. I felt SO vulnerable for the first 5 minutes! Our minds adjust and need protection if we usually have it.

I love the feeling of community, I love the physical aggression and contact, I love learning to increase my awareness of all that is happening in each moment, and developing my decision making speed & effectiveness. I love being surrounded by strong and driven women.
I don’t like having a regular schedule! It is part & parcel of being part of a team, a community. I hear that there is drama, but I see little of it. I don’t like getting hurt.

Can you introduce your leage ?

My league, the Rat City Roller Girls started out in 2004 and is consistently ranking among the USA’s top 10 derby teams. We’re lucky enough to have grown to a size where we can hold our bouts at the Key Arena, and have several thousand fans attending our bouts.

How is, for you, Roller Derby in Europe compared to the US ?

My experience of roller derby in Europe is limited to only attending the practices of four British league’s practice sessions, seeing the London Roller Girls play some bouts in USA, and attending the Mens European Roller Derby Championships last month. My view is that Europe will have a very strong rise over the next five years. I’ve been involved in international skating environments for ten years, and I’ve seen different nations or continents rise and fall in level many times. My instincts say that Europe will rise soon. Skating skills, new approach, morale of the underdog etc. Juniors maturing will have a significant effect though, and I don’t know if Europe has many junior leagues.

You were at the MERDC. What do you think of Merby ?

I think it is changing fast. Watching men playing derby used to bore me, and now it excites me. The jammers are so powerful and intense that watching them spring from place to place without fear of failure is addictive. Men, as a generalization, tend to throw themselves into trying things that they might screw up. Their approach can be very heavy handed, so they might break something that a woman would be more gentle with, but they’re going to achieve things that seem unlikely. In derby this seems to result in their having a faster learning trajectory while missing out some of the basics. Again, as a complete generalization, women like to stick to safer moves and techniques that are more trusted forms of getting results, and steer away from going for things that might fail. This reduces speed of learning. Recently, men have started developing the more basic skills such as strategy, which is making them more and more powerful. I see co-ed derby becoming less popular in some years.

You decided to open a shop. Why ?

I came to the USA to help develop inline skating by importing and distributing Seba skate products to skate shops, and using that position to help support skaters and skating events. I soon saw that there are very few good skate shops in the USA and having more of them would have a much bigger impact on the re-growth of inline skating here. I met Leon Basin, creator of Shop Task (a Canadian skate shop that became 2 and then 3 and now 4 skate shops in Canada), at the annual Skate Instructor’s Association conference, and we decided to join forces to bring Shop Task to the USA. Leon has built Shop Task to be wholly focussed on meeting the needs of inline skaters and getting involved in the local communities.