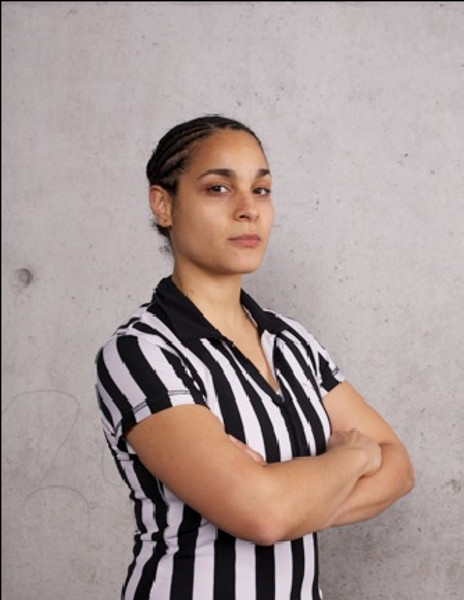 I  met Tique in Monpellier, where she was invited to act as head ref for two matches. I suggested to interview her.

Can you introduce yourself ? 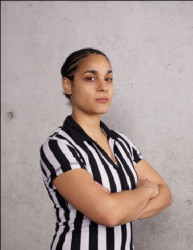 When and how did you start skating ?

I started to skate in my children time with friends. We were kids in the late 80’s, skating and playing skategames in the street.
Like a lot of Derby people I didn’t practice for more than ten years, but it was quite easy to re-learn skating.

You were also a Roller Derby player. Is it still the case ?

No, I don’t think so. The girls are taking so many risks to get hurt, each time they go out on the track,…Officials are a litte more safe. In 2011 I broke my ankle at training, while trying to hockeystop. It took me two years to feel good on skates again and I don’t have the time in my
life to brake my bones again. The other side is: I discover thant there are a lot very nice people in the officials teams and it’s much more my sort of humor. It’s always nice to be in an zebra-team.

Can you introduce the Berlin Bombshells your team ?

The Berlin Bombshells were founded in 2009. Today the Berlin League is so big that we had three full home teams and a full team of Newbies. Berlin Bombshells needed a League Name and most members voted for Bear City Roller Derby (BCRD). That’s the actual
name of the Berlin league.

For the new season we will also have a C-Team, to have a team which plays mid european level and other german teams. Here you can also find our younger players.
Then we will also have a Rec- Team for all „just fun“ players and players who can not spend so many attendence at trainig time but still wants to play. BCRD is always in a learning process, that’s why we start this new system with C- Team and Rec, so everyone could play.

Your league is full WFTDA member, what does it means in practice ?

Can you explain, for our non Derby readers, what being a referee is ?

Working as an skating Official (Referee) means first to learn the rules of Roller Derby, the much and best as you can. Attend, in best case, all skate traings and all srimmages of your home team. Built up a stable Officials crew. Train together, learn and discuss rules together. Read the
forums, as often you can, update your self about new rules publications. Assist as much as you can at bouts first for your homeleague, than for other leagues.

According to you, what are the skills needed to be a good ref ?

Love skating, a big love for Roller Derby, big love for fair Play, passion, pation, a need for precision, being good in teamwork, a lot of time.

I love Roller Derby. I really like sports on wheels, fair Play and the way that derby looks to me. I like to spend my time discussing rules, fitness, nice peoples and a little competition to be very good at work. I spend my time with passion for this great teamwork. We ref to make a fair game possible with our whole team. The girls are really fighting to win. Each team by his own way. It ́s every time impressing how hard everyone is working to make the game flow. And after all this hard work and competitions, everyone is partying together and we all had a great time together.

What would you like to do in Roller Derby in the future ?

I would like to travel more than today and to spend more time with other leagues.

Love Derby and don ́t forget your out- of- derby- life. Keep skating.